There will be a memorial service for Stan Smith on Saturday, June 30 at 11:00 A.M. The service will be held at:

Manlius is located about ten miles outside of Syracuse, NY
Posted by Bethany Bible Training Center at 10:22 AM No comments:

Stan Smith - Home with the Lord

As many of you may already know, Stan Smith went home to be with the Lord on May 3, 2012. Stan was a graduate of Pinecrest Bible Training Center and started his ministry at Pinecrest Retreat Center in Setauket, Long Island, New York. Stan was never religious, but was truly a lover of God and of His people. He will be greatly missed by all thosed who loved and knew him.

Along with the memorial service, held at Agape Church, there will be one in the south hosted by Bob Lake and another to be held in the north hosted by Tom Worth. As the dates and locations are set, we will post them here on this blog.

Below you will find a copy of the obituary written by Stan’s lifelong friend, Dr. Tom Worth and revised by his wife, JoAnn DeJoria Smith. You can also read the article written by Dr. Tom Worth on Charismanews, an online publication of Charisma Magazine.

Please be mindful of his wife JoAnn and the ministry they started, and in lieu of flowers, please consider sending donations to: 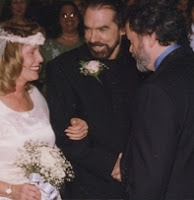 You may also donate on gospelsmith.com. Your donations would be greatly appreciated.

“Stanley Roland Smith, Jr., 59, died at home, early in the morning, May 3, 2012, with his wife, JoAnn by his side. Stan was born November 11, 1952, the only child of Stanley Roland Smith, Sr., and Charlotte Hale Smith. His father was a musician who had played the French horn under Toscanini and his mother is a well-regarded Christian writer. He was born in New York and grew up in Georgia. He graduated from Druid Hills High School in Atlanta in 1970. He was a graduate of Pinecrest Bible Training Center, Salisbury Center, NY, and had his B.A. from Canada Christian College, Ontario. After graduating from Pinecrest in 1975, he served faithfully as a Minister of the Gospel for the rest of his life. He began his ministry in Setauket, Long Island at the Pinecrest Retreat Center.

Then he was a Bible teacher at Faith Haven in Woodstock, Ontario, where his son, Christopher was born to him and his wife, Deborah Smith. He served as a pastor in Adrian, Michigan, and then pioneered a church in Detroit where he served as a pastor for well over a decade. There, he would go into the roughest areas of Detroit, such as Clarke Park and tell people about the Savior.

He made mission trips overseas to places as various as India, Bulgaria, Switzerland, Latin America, and England. Throughout his career he was in demand as a visiting preacher in many churches. He spent the last twelve years of his life in the Central Coast of California with his wife, JoAnn DeJoria Smith, whom he married in 1999. During those years he and his wife JoAnn attended Agape Church. Stan was often called upon to preach or minister prophetically during their time at Agape. They also travelled on various mission trips to China, Peru, Korea, Switzerland, England and spoke in many churches across the United States. When Stan was no longer able to travel they planted and pastored a church in Nipomo called The Gathering.

He also wrote books and tracts on practical Christianity and a memoir of his wife, telling of her conversion. In his later years, he strengthened and taught many believers over the Internet through his website www.gospelsmith.com and on Patricia King’s television programs. Several of Stan’s articles were and are posted on Elijah List, Patricia King’s site and Identity Network. Not the least of his gifts was his original musical ability on keyboard, guitar and vocals. He wrote songs and choruses, which are still being sung in congregations to this day. But his great interest was in exploring spontaneous musical expression in worship services, seeking to convey creatively what he sensed the Spirit was saying. He was a midwife in that sense, helping many into greater freedom of expression and deeper creativity.

And yet all these descriptions and accomplishments hardly convey the mystery of the man. Those who knew him would all alike confess that he was one of the most original characters we have ever known. He was a man of the Spirit and yet he was very down to earth. He centered his life in Jesus Christ. He was a deep thinker and a capable and practical theologian. All who heard him preach and teach and prophesy were brought into fresh focus on the Lord Jesus. He was not perfect, and he had his blind spots, and he was deeply sensible of his faults, but the difference was that he freely admitted as much and had a disarming candor in confessing those things. None of us will forget his infectious sense of the absurd and his kindly humor. He was a delightful conversationalist. He was a loyal friend. He coped gracefully with brain cancer for the last two years of his life. During those years the two paramount aims of his life came into clearer focus: he loved God and he loved people. He may have been the smartest man many of us have ever known, and yet—all of that was eclipsed by love, the love of Jesus.

He is survived by his wife, JoAnn DeJoria Smith, of Nipomo, California, his mother, Charlotte Hale Pindar, of Savannah, Georgia, his son and daughter-in-law, Christopher and Danielle Smith, his grandson, Garrett and his granddaughter, Sydney, all of Three Rivers, Michigan. His stepdaughter and her husband, Heather and Bryan Hutchens and their children, Robert and Kathleen, also survive him.”


Posted by Bethany Bible Training Center at 4:39 PM No comments: