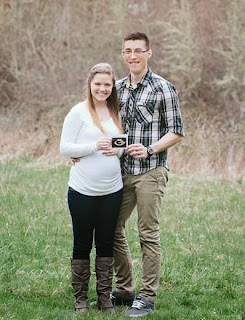 It feels like only yesterday we were attending chapels and classes, as well as working in the kitchen and maintenance. We are happy to share an update of how our lives have changed and progressed in the Lord since attending Bethany!

Almost four months after graduation, we were married in Florida and moved to Virginia. As students, sometimes we get in our minds that after graduation we must become pastors and plant a church. However, that is not always how the Lord works. Daniel became a heating and air conditioning technician and I became a preschool teacher. We quickly became rooted in a church in Fredericksburg, VA, and began serving in any way possible. We did anything from assisting in leading the youth group to greeting at the doors on Sundays. Where ever we were needed, we allowed the Lord to use us. This included our jobs as well. Being a Christian is living for the Lord every day and taking every day as an opportunity to minister in any way we can. The Lord really used the first year and a half of our marriage as a time of pouring out what the Lord had poured into us at Bethany.

A year ago, our lives changed in a very dramatic way. After much prayer and discussion, Daniel and I decided that the Army was the direction in which the Lord was leading us. This was never what we had planned to do, but God has a way of changing "our plans" and guiding us into His own. It was definitely a trying time for both of us. Daniel was gone for 9 months of training to become a cook as well as an Airborne Ranger, with only a few opportunities for us to see each other. Although this was hard on both of us, the Lord was working in and through us each and every day. He taught us to depend on Him completely. Luke 1:37 says "For with God nothing shall be impossible." Daniel has been able to minister to his fellow soldiers, and set a standard that is not "normal" in the military. This is all by the grace of God.

We were stationed in Washington State as of January 2014. We have found a church here, and are looking forward to how the Lord will use us here on the west coast. We are expecting a baby boy in August, which is such a blessing from God. Daniel deploys soon, and we are praying for grace and favor over him where ever he may go. We are so thankful for what the Lord has done, is doing, and will continue to do in our lives.

God Bless you all!